Many immigrants of this period lived in segregated urban barrios (neighborhoods), such as Chavez Ravine in Los Angeles.
Read full overview|Go to first item 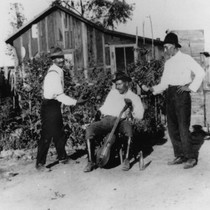 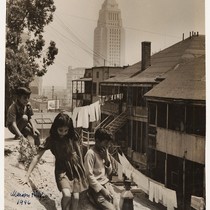 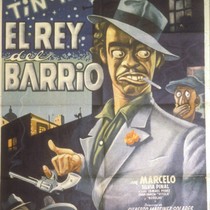 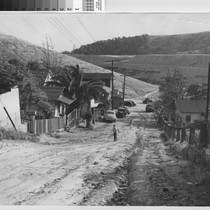 Photograph of two children walking up a hill in Chavez Ravine 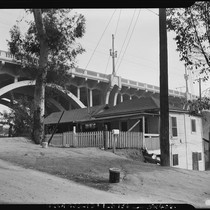 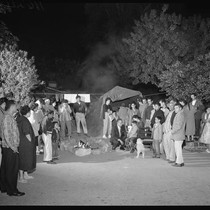 Many immigrants lived in segregated urban barrios (neighborhoods), such as East Los Angeles. One photograph shows three men, one with a guitar, in front of a family home in Anaheim. Another shows children playing behind houses in their Boyle Heights barrio, with downtown Los Angeles in the background. The poster for the popular 1950 Mexican movie El Rey del Barrio, ("King of the Barrio"), starring the comedian Tin Tan, shows the hero wearing a zoot suit.

Two photographs show the barrio of Chavez Ravine as it existed in 1950. This cluster of quiet almost rural Mexican American communities was notable for the unity of the residents. Soon, however, the peaceful neighborhood would be gone. New housing laws, racial tensions, fears of communism, and economic and political realities all played a part the forcible removal of residents from their homes and properties in Chavez Ravine in 1951.

Two years earlier, Congress had passed the National Housing Act of 1949 to improve the lives and standard of living for a broad range of Americans. The city of Los Angeles approved 11 housing projects, including one on the site of Chavez Ravine. Homeowners were told they would have first choice of units and receive assistance in finding a place to live while the housing was constructed, and many sold their property to the city housing authority for less than the property was worth.

But later in 1951, the project was canceled, essentially to make way for the new Dodger Stadium. The remaining residents were forcibly removed from their homes and properties in a controversial eminent domain decision. As one photograph shows, even in 1959 the Arechiga family (joined by Mexican American city councilman Edward Roybal) was still camping out near the site of their former home. The stadium was not completed until 1962.

"Hispanic Americans: Barrios, 1930s-1960s" was curated and written by the University of California in 2005 as part of the California Cultures project.

Stealing Home:
How Race Relations, Politics, and Baseball Transformed Chavez Ravine
Copyright © 2020 The Regents of The University of California